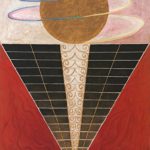 In speaking of two dimensional images– there are alter-dimensional analogues, but it is better to start with the one explored the most– there are base shapes that command power. This is a concept that has been explored five ways to Sunday, the sixth containing perhaps the entire “long tail” of variations. I do not have a fully developed, completed system for explaining and defining my own conception of these shapes, so this piece is me unfurling a sail, setting off from the docks of ‘art theory’, ‘STEM’, and ‘psuedo-psychology’ into the seas of the occult (as you could similarly describe much of my life at 23).

When I say ‘image’, it will be the most applicable to practical use to consider the visuals/scene/design implied by the pigment. I’m not a proper platonist, but the metaphor of a seperate, perfect thing abstractly behind the physical paint or marker is a good point of reference for this idea. This is likely the same reason that mathematics/geometry (as an abstract, ‘perfect’ system) has nearly an exactly interchangeable list of significant visual elements.

The power of one part of an image over another part of the same image is related to, if not equivalent to, the amount and style of focus it commands. Just like your own energy flows from your undirected core into the line -> point focus of your arm, hand, finger, wand, power circulates within the picture plane. If you prefer a non-human example, it is the same as water being pushed from a large tank into a small pipe: Pressure = Force / Area, so as the area goes down, force increases for the same amount of overall pressure a thing has. An image, once it is finished by the creators and is looked at by another party, has no change in “pressure” as long as the viewer is trying to read/use/understand it and not change it.

This leads me to “the point”: the most basic part of a drawing, as well as mathematical constructions. While in math a point or dot tries to be as one dimensional as possible, in practice we can conceive of almost any relatively internally homogenous closed mostly-convex shapes as a point or dot. (Hell, physicists are the worst offender here, throwing my reasonable guidelines out the window all the time. If a hypothetical human is to be more or less a sphere then I would like them to at least ask us to imagine someone relatively convex.) Points do not like to reference other shapes. Alone they do not point or connect. They draw focus into themselves for their own sake (when not arranged to imply a more complex shape, like a line).

> The numogrammatic equivalent for the point is the zone; at certain level of focus, the syzygies are as well.

It is worth at this point mentioning size and color: color is a complex visual practice in and of itself, but you can imagine that a bright red point would be more attention-commanding than a pastel. Size, on the other hand, is an unusually linear scale from large to small. In what I would consider the “middle” of a useable logarithmic scale are sizes based on their relation to the human body: what can you see all at once? What do you have to back out to see? And what do you need to carefully scour to discover? At whatever your current level of zoom, there is a size that you will register first, then usually moving inward (closer) and then outward last. I’m sure there is a psychological basis for that claim, but I’m confident enough in it in itself that I don’t really care that I don’t know, haha.

Meanwhile your eyes are using lines (either literal or implied) within the image to travel around it. The middle of an undecorated line is not as interesting as the endpoints– there, I said it. Endpoints are modified points, after all. They are points that reference each other, as well as the wand tip. Endpoints are a focal point but they also have direction, which makes them not as attention commanding as points alone. Furthermore, it is possible as an artist to take power away from an endpoint by controlling the thickness, the shape of the tip (point vs rounded), or by fading it out. These aspects of lines can be applied to directly modulate the amount of power that it controls, just as color, contrast and overall size can manipulate the power of a point; but were you to use a pen-pressureless hard round PS brush, (all other things being equal), these are the qualities of these shapes.

> The numogrammatic equivalent for these lines are the currents and gates. It is worth noting, however, that arrows are not enough to force the eye to move in one direction, as is the case with gates; this has to be intellectually understood, else lines are two way.

All images are made up solely of these two things as defined. They are the most brought to light in sigilization as is currently practiced, but focus is something taught in any art class; by paying attention to your eye movement the first time you see any image, you can consciously learn to identify these lines of motion. Points are easier to identify, but more complex shapes may require you to unfocus your eyes to see how color may connect things that seem to be seperated.

Now, this system interacts with internal definitions of ‘meaningful’ to the point that their shape doesn’t seem to matter. A face draws attention because it is a face, not because it is dots and a line. But if you are only looking at a single face with a lot of detail– well, at least, if I am– eventually I find myself tracing the contour of the chin, nose, brow: lines. And at points where two lines meet, forming an angle, (say, the corners of the mouth) there is significance. This location has the endpoints of three lines: the opening of the mouth, (which when closed usually has the same visual loudness as) the cupid’s bow, and the contour of the bottom of the lower lip. The more acute the angle, the darker this location will seem when you unfocus your eyes. This sort of location, where lines meet, is a landmark with an easy to describe location. Many people can not easily tell you where two thirds of a line, is, which means it is similarly hard to differentiate from 3/4ths or 5/8ths. (This, I suppose, is why I think that the middle of an undecorated line is not as powerful.) But almost everyone could identify the corner of a mouth or eye. These things all collude to increase this spot’s “importance”.

All of this is extremely important for sigilization, and provides the basis for my previous numogrammatic how-to. I chose to use lines and angles for aesthetic and ease of use reasons, but any simple constructions could equally be used as long as they don’t run into issues where zero is required, or require there to always be more of one than the other. (For example, an angle does not exist until lines create it– though clearly there are solutions, as I found in my piece.)

Now, much of this stuff is extremely basic, but it was important for me to define my terms in this way and form my description from the bottom up. I have a series of optical issues in my physical eyes and brain; they are mainly not hallucinogenic in nature, but instead have to do with both the eye itself (severe nearsightedness) and with the optic nerve (visual snow, best described as like a high ISO as in photography. But in my eyes. And flashing a little all the time. I’ve had it my whole life, so I know it’s not because of something I did.) Meanwhile I have a few visual effects that could be caused by anything; perhaps related to the visual snow, or I took too much acid in college, or some rare disorder. Maybe all three. As a result of all of these optical issues, I have kind of funky vision; with glasses and proper lighting, the effects are ignorable for the most part. But when I take my glasses off– as I nearly always do unless I have to see something more than a foot in front of me– the world is a lightly flashing mess of lines, colored shapes (points), and their lightly overlapping doubles, triples, and resultant vibrating edges.

> As you may imagine, reading text is not as easy as it used to be.

Anyways, I will explore my optical issues’ modifications on lines and points, as well more detailed applications of these elements, in another post.